Learning from an Addiction 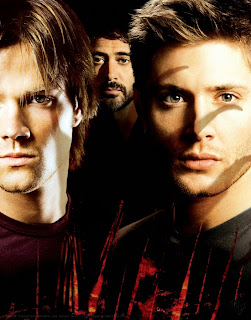 Lately, I’ve been absolutely addicted to the TV drama, Supernatural. I never watched the show before, straying from it because ghosts scare me to death.  I’ve always heard great things about the show, and when I found the first season on DVD on sale, I had to buy it. But even after I bought it, I didn’t watch it for months. It wasn’t until last month when I decided to unwrap the case and pop the first disc into my DVD player.


WOW!
That’s all I can really say. The show is spectacular. The main characters are very well developed (and super hot), the plot is always fast paced and intriguing (did I mention the hot brothers).  So I started thinking, what is the draw of this show? What gets viewers to tune in every week? Is it the hot brothers? No doubt, we women do love our eye candy. It’s sweet, tasty, and calorie-free.  But eye candy isn’t always the reason people tune in. Is it the character’s themselves? The brother’s battle with good and evil, as they start to realize one of them may soon turn evil. That’s some interesting stuff. But a good character, without a good storyline, is not a way to gain an audience. Maybe it’s the plot. I mean, this show does have a great plot. But… I’ve seen other shows with very promising plots that were actually very boring and didn’t last long.
Then it hit me. Yesterday, I sat watching the show on my laptop. It was eight at night and I told myself that I’ll only watch one episode and then I’ll go write. Yeah, three or four episodes later, being the only one awake in my house, I got scared and crawled into bed.

So what made me watch this show instead of write (which I love so much)? The cliffhangers. At the end of every episode, I was dying to find out what will happen next. All through the show I keep thinking, what will happen next? Why did this or that happen? What secret is this person keeping? How will they escape this mess?

That made me start thinking about books and I noticed that every book I loved made me ask questions until the last page.

Recently, I encountered someone (who is in the book industry) who kept telling me that readers don’t like to ask questions. They don’t like to think while reading. Instead, readers prefer descriptive, flowery language. They like to know what everything looks like and feels like and would rather read pages of details instead of pages leading to “what will happen next” questions.

That contradicted everything I’ve ever known about writing. I also thought that readers like the details to be incorporated in a way that doesn’t slow down the pace of the action. This person told me they like pages upon pages of nothing but description. I thought readers like that cliffhanger at the end of a chapter that will keep them reading. This person says that cliffhangers turn readers off. This gave me the biggest writer’s block I’ve ever had. It made me wonder if everything I’ve ever learned about writing was wrong. It wasn’t until yesterday’s Supernatural episodes that pulled me in because of the questions asked and not the location where the episodes were shot.

So I’m asking you guys, what do you think: Do you prefer books that make you ask why, what will happen next, and how will they get out? Or do you prefer books with pages upon pages of details and descriptions and very little action?
Posted by Angelina Rain at 10:43 AM