Swimming With The Fishes 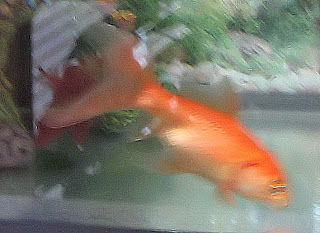 Two years ago, I bought myself this little goldfish you see in this picture. At that time, his little body was golden but the tail was black. He didn't look like a real goldfish, or maybe like a bad-ass fish who broke the rules by having a different colored tail. That was the reason why I bought him, and I named him Blacktail.

Blacktail resided in the 10 gallon aquarium for two whole years. He was with me when I had my good times, as well as the bad, and when I split from the ex, Blacktail came with me.

I took care of my little fishy and after some time he started to recognize me. I would come home from work and walk over to his aquarium and he would swim to the surface. I liked to assume that he was saying "Hi, Mamma," or "I love you" although I know better. "Feed Me!" was probably the more likely reason why he liked to see me.

Nontheless, he was a good little goldfish until this Sunday. I came home from work to the bad news that Blacktail died. I saw him floating up top, not breathing or moving his little mouth as he usually did.

He was a good little fish and in the two years I had him, I've grown accustomed to seeing him in the aquarium. Now, I look at the empty water tank and I miss seeing the flash of gold zig-zaging through the water.

It is with love that I say goodbye to Blacktail. I hope you're swimming with the fishes in little fish heaven.
Posted by Angelina Rain at 9:38 AM