Hello everyone! Today, I have guest author, Allison Grey, who is talking about her Half-Ling book series.


AR: Tell me about this series, how did it come about?

AG: Honestly, it just started on a complete whim, which is how most of my projects do! I had gotten into the habit of writing strictly horror fiction, and realized I felt like something was missing. It was at that moment I realized that I had been writing romance novels for years, for I believe every genre and every book has an element of romance, whether or not that is the focus. Love keeps us going. I browsed the publishers on a writer’s website, and I stuck on Evernight. I picked up one of their ebooks and read it that evening. The next day, I sat down in the front of the computer and began to write the first thing that came to mind. The next thing I knew, the Half-lings Series was born. I’m currently working on two books in a spin-off with a new hero and heroine. It takes place in the world of the Half-lings, but the world they create with each other is definitely a long-shot from the world of Reney Rose!

AR: Who is your heroine and what are some of the conflicts she faces?

AG: Reney Rose. I love her. She’s so different from myself, yet we seem to have a lot in common. I know I put a bit of myself into every one of my characters, and she is definitely part of my “smartass” persona manifested. Reney was a city girl, an intern at a fashion magazine, and was indubitably unprepared for the truth of the world she finds herself a part of. There are plenty of external conflicts with the Romanian vampire(s) she faces, but Reney grows on an emotional level more than anything. I loved seeing her progression from Book One to Book Three. I think on the most basic level, Reney learns that not only is she far stronger than she ever thought possible, she was ready for a change, all along. What she finds in her lover makes the entire new world she learns of worth fighting for. She makes several appearances in the next books, and is challenged once more at the hands of her younger sister, Margo Rose. Though Reney has certainly been through a lot, I think Margo may test her inner strength and concept of love more than anything she has ever faced.

AR: Who is the hero and what conflicts does he face?

AG: His name is Ahulani, and he’s a Half-ling (half-vampires, if I didn’t clarify!) from Hawaii. Unlike Reney, he grew up in the world of the Half-lings, and he guides Reney through the experience, which comes as quite a shock in her early thirties! Ahulani has always been a laid-back “nice guy” sort of a fellow, yet he carries a rage inside him that stems from the murder of his mother by the vampire Richard, aka Vladimir Popescu. The hatred consumes him at times, and contradicts everything he thought he knew about himself. He keeps finding himself in situations where he has to contain the fury toward Richard in order to fight for the greater good, especially when it comes to his love for Reney. In “Bloody Promises” he faces the greatest challenge of his life when he is forced to team up Richard in order to fight Marian Popescu, Richard’s cousin and the vampire that wants Reney and Ahulani’s daughter dead. His sense of humor also grows along the way thanks to the ever snarky Reney, and just as with my heroine, I have a special place in my heart whenever I re-read the pages and watch him develop and change.

AR: Where did you get the idea for this series? Who or what was your inspiration?

AG: I’ve always loved vampires, but I used to have a notion that I should stray away from anything popular. Now, I’ve budded alongside my hero, heroine, and even my villains (I admit, I love my bad guys dearly) to develop my own point of view and write what makes me happy. I never know where my inspirations come from. I just sit and write, and the story follows. The only downside to this is to watch carefully for plot holes, and thankfully, Evernight has really shaped me into a professional. I can catch a plot hole with my eyes closed. I think all of my inspirations come from an amazing world, and I’ll never stop reaching for it.

AR: As a reader, what kind of books do you like to read?

AG: I enjoy books on spirituality, philosophy, the paranormal, microbiology, true crime, and quantum physics/mechanics. I have a stack of books by the bathtub I’m stuck in all at once. I definitely do not read as much as I would like to, and I’m extraordinarily picky about my fiction selections, but I do enjoy fantasy and paranormal romance. It seems I get a new idea from everything I read, and dash off to the computer to start typing. Some of them turn into great things, but only if an idea haunts me into seven a.m. and drives me to the keyboard like a zombie do I know I’ve got a winner; a story and characters I’ll fall in love with, and always hold close to myself.
Thanks Allison for stopping by. And now, a little more about the series! 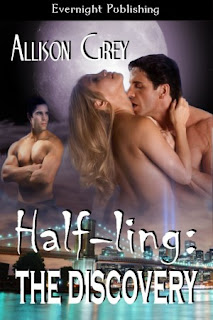 Half-lings Series, 1
Reney Rose looks like a fashion model, but actually spends her days editing real models into the famous So Glam Magazine. With a slew of jealous co-workers ready to burn her at the stake, Reney’s not sure she can take another day in the cubicle. Until she gets news of an intern’s dream come true—Richard Rogan, the dark and striking senior editor of So Glam, has chosen Reney to accompany him to Hawaii! Mr. Rogan has never even spoken to Reney, but his mere presence makes her weak in the knees.

Things get even more heated when she meets Ahulani, a gorgeous Hawaiian whom she feels strangely drawn to. Only, Ahulani has news for Reney. They’re both half-vampires, and Richard is an evil full vampire determined to drain her potent half-ling blood. Reney is falling fast for Ahulani, but will she be able to resist Richard’s hypnotically wicked lust?
BUY BOOK HERE 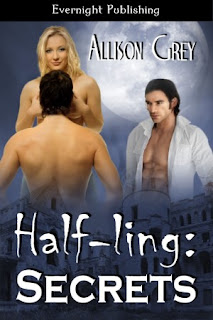 Half-lings Series, 2
Reney Rose can finally accept that she's half-vampire, and she's just starting to get settled into Hawaii with her fellow half-ling and lover, Ahulani, but there's a tension in the air... There's no question that Richard, the powerful full vampire hell-bent on their destruction, is going to come back. Even worse, Reney doesn't know how to feel about her dangerous former boss, because even though she's a spell-breaker, there's something about Richard's spell she just can't seem to melt.

Until the phone call. Richard has kidnapped Reney's best friend, Jane. They must travel to Romania in order to save her, and face Richard head-on in his own territory... a dark place where Reney will discover that things aren't quite what they seem. But not only does the castle across the sea hold secrets for the half-lings, there are more lurking just outside its walls...
BUY BOOK HERE 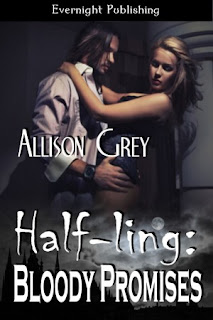 Half-lings Series, 3
Newly wed half-vampires Reney and Ahulani have just had their first child, and they couldn’t be happier…if they didn’t live in constant fear of the vampires Jane and Marian. The cousin of the vampire Richard, Marian is a notoriously sadistic intellectual who will stop at nothing to please his lovers. When the half-lings find out Jane will only be satisfied with the murder of their daughter, they must travel to the homeland of the vampires to try and make the first move in a horrifying race to save their daughter.

Only a head vampire stands a chance in a fight with Marian Popescu, and Reney can think of only one with any incentive to assist…. He wants his throne back. Reney wants her life back. But will their worst enemy really team up with them without turning on the half-lings himself?
BUY BOOK HERE

Posted by Angelina Rain at 9:31 AM