Please welcome author Doris O'Connor today where she'll be telling you about her ultra-hot new book. 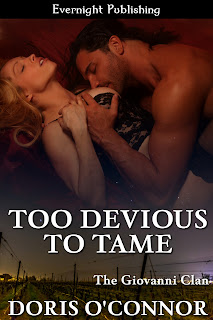 AR: Tell me a bit about this book. What is it about?
DO: Too Devious To Tame is the third book in my Giovanni Can series, and tells the story of cousin Giorgio and the wayward Jemima. We first met both of them in book two of the series. Jemima is the twin sister of Cousin Marco's wife Elise, and she wreaks all sorts of havoc in book two.


In Too Devious To Tame she has lost her memory, following a blow to the head in a car accident, and it falls to Giorgio to help her unravel their joined past, and to protect her. Because Jemima being Jemima got mixed up with all the wrong people, and things get rather dangerous for both of them.


AR: What was your favorite part about writing this story?


DO: Exploring the emotions between them, and what makes both of them tick and see why they behave in the way they are. Neither one of them was a particlurly likable character in book two of the series, so I really enjoyed the challenge of getting the reader to relate to them both.


AR: Where did you get the idea for this book?
DO: I seem to recall watching a program on telly ages back about head injuries and amnesia, and how it can change a person's personality, so I stored that snippet away for future use. It seemed appropriate for Jemima. She had to come a-cropper living the life she leads, and as I like to torture my characters I had fun with the whole concept of waking up and not knowing who you really are.


So, not only does she have to try to figure that out, she also has to deal with the impossibly arrogant and extremely angry man who claims to know her. She knows that she's done something to him; she just doesn't know what it was.


Throw in an off the scale attraction and dangers lurking round every corner, and it makes for an interesting ride!


AR: What genres do you prefer to write in?


AR: What's next for you? Are you working on anything new? Tell me about it.


DO: I have two Romance On The Go stories coming soon from Evernight.


Natasha is a breast cancer survivor who is persuaded to enlist Mr. SG's services by her mother as a fortieth birthday present. If you've read the original Mr. Satisfaction Guaranteed, you know things are never what they seem with Mr. SG and this story is no exception.


If I listed all the ideas bouncing around in my head, I'd be here all day ;-) Suffice to say my muse is keeping me busy.


Thanks so much for having me here today, Angelina J


When Giorgio Giovanni tracks the troublesome Jemima down in a hospital bed in Italy, he has one thing on his mind—revenge. However, the fragile woman he encounters is not the devious female he remembers. When it becomes clear that she is in danger, he risks everything to keep her safe.


Left for dead, Jemima wakes up in hospital, terrified, and with no idea of her identity. The angry man, who comes to claim her, is the only link to a shared past she can't remember. A past that threatens to destroy them, and all she has ever held dear.


With danger all around them, and their sexual chemistry off the scale, can they find their way back to each other, or is the past too devious to tame?


Tears clouded her vision at the concern in his voice, and he swore and moved to untie her.


He stared at her for the longest time, one large hand, hot and heavy on her belly, his gaze so intense it took her breath away.  When he finally smiled, it lit up his harsh features. She didn't catch the murmured Italian words he mumbled under his breath, but the kiss that followed had her curl her toes into the bed with the effort to not release herself from her bonds and bury her hands in his hair to make him hurry up and fuck her.


He was breathing as heavily as she by the time he released her, and she bit back a moan when he simply ripped the rest of her dress off her. Her bra and knickers followed the fate of her dress, until she lay in front of him naked, wet, and wanting. He ran his knuckles slowly up and down her tummy in ever widening circles, and then reached across to the ice bucket with a slow grin.


"Shut your eyes for me, cara."   His voice had dropped an octave, and her stomach dropped right with it, seeing him hold a couple of ice cubes in his fingers. She shook her head and bucked off the bed, when he flicked his hand over her breasts. Ice cold drops of water fell on her skin and trickled between the valley of her breasts. He licked the drops away, his warm tongue taking away the coldness left by the water.


"Shut your eyes, trust me. This will be so much better for you when you can't see what I'm doing." He kissed a path down her quivering tummy, and she blinked back tears at the tender way he caressed her abdomen. He paused to drop a long kiss just above her pubic bone, and his hot breath teased her wet folds. Her clit tingled, and she shut her eyes, as he renewed his request for her to do so. She couldn't see what he was doing, but the bed dipped as he adjusted his weight again. His hot mouth closed over one of her nipples at the same time as the other was subjected to an ice cube being circled around it.


She gasped at the intense sensation, and Giorgio swapped sides. The difference between his warm mouth and tongue and the ice cube sent her body into spasms of need. She writhed under him, and he laughed. Again and again he repeated the process all along her body. A path of ice, followed by the warmth of his tongue as he licked the icy trails away, leaving fiery awareness in its wake. By the time he finally reached her pussy, she was hovering on the brink of orgasm. She whimpered her need when he pushed an ice cube high into her channel and then proceeded to lick around her clit, careful to never touch her when she needed him most. The melting ice cube mixed in with her own juices and trickled slowly out her hole. Her pussy clenched, and she didn't recognize the needy voice pleading with him to please do something.


He blew against her slit and shouldered her legs wider.


"Così bello, e tutto mio."   He followed the words with a kiss, and she screamed when he pulled her clit into his mouth and swirled his tongue around it, at the same time as he pushed another ice cube into her empty channel. Her walls closed around the slippery object, and spasmed wildly as the first quivers of her orgasm hit. Giorgio groaned into her core and stepped up his sweet torture on her clit. When he pushed two fingers into her core, and massaged her sweet spot, the intensity of her orgasm hit her with the full force of freight train.


"That's it, tesoro, fly for me." He caught her scream of release in his mouth, and she could taste herself in the passionate kiss he gave her, dimly aware of him withdrawing his fingers and replacing them with his cock. Thick, hard, and so very long he filled her completely as he pushed into her swollen core, until he was seated to the hilt. She wrapped her legs around him and dug her feet into his calves to give him better access and to take him as deep as she could. He started thrusting, every move driving him deeper into her, and tumbling her right over the edge again, as her inner muscles contracted around his thick member. Faster and faster he pumped, his harsh breathing in her ear the most erotic sound ever, his hands and lips seemingly everywhere, arousing every little bit of skin he touched until her whole body was a mass of sensation. Again her body climbed toward that peak of sheer joy, and this time Giorgio was with her every step of the ecstatic journey they took together. Her eyes flew open, and she drowned in the rolling depths of emotion she saw reflected in his, as they came together in their explosive release.


When her body finally stopped shaking, she could taste the salt of tears in her mouth. Giorgio kissed them off her face, and he released her from her bonds, and pulled her into his embrace. She had to smile at his grumbled, "If this is pretending, then I hate to see what will happen when we do this for real."


Author Bio:
Glutton for punishment would be a good description for Doris... at least that's what she hears on an almost daily basis when people find out that she has a brood of nine children, ranging from adult to toddler and lives happily in a far too small house, cluttered with children, pets, dust bunnies, and one very understanding and supportive husband. Domestic goddess she is not.
There is always something better to do after all, like working on the latest manuscript and trying not to scare the locals even more than usual by talking out loud to the voices in her head. Her characters tend to be pretty insistent to get their stories told, and you will find Doris burning the midnight oil on a regular basis. Only time to get any peace and quiet and besides, sleep is for wimps.
She likes to spin sensual, sassy, and sexy tales involving alpha heroes to die for, and heroines who give as good as they get. From contemporary to paranormal, BDSM to F/F, and Ménage, haunting love stories are guaranteed.
Find Doris on the web here:
Website  Blog Twitter Facebook Pinterest
Posted by Angelina Rain at 7:00 AM