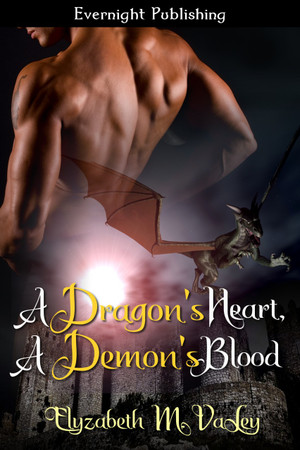 AR:  Tell me a bit about this book. What is it about?

EV: A Dragon’s Heart, A Demon’s Blood is a paranormal fantasy that focuses on Adrian Ormonde, a 150 year old bounty hunter with a lot of secrets and Victoria Green, a young woman that has lived with the feeling of being watched ever since she can remember. New questions arise upon their meeting (along with a whole lot of passion) and both of them are thrust into a quest for answers that could easily end with their lives or change the balance of two worlds.

AR: What was your favorite part about writing this story?

EV: I had a lot of fun writing this story but one of my favorite parts was the moment Adrian and Victoria met for the first time. Not only did it make my own pulse accelerate but the fact that they did it in Madrid, in places I know, made it all the more special.

AR: Where did you get the idea for this book?

EV: A Dragon’s Heart, A Demon’s Blood began thanks to a writing prompt group called “Wednesday Briefs”. The prompt that gave birth to Adrian was “I’d like to make you an offer…”, though already I had been toying with the idea of dragons and demons in an earlier flash in which the prompt we had to use was: "His/her eyes were as green as..." Adrian’s eyes are green.

AR: What genres do you prefer to write in?

EV: I don’t have any particular preference. I’m a slave to my Muse, LOL.

AR: What's next for you? Are you working on anything new? Tell me about it.

He is a shadow in the dark, smelling your scent and sensing your fear...

Legendary bounty hunter Adrian Ormonde is no ordinary man. His life is filled with secrets and questions, blood and lust. His only concern for 150 years has been survival and discovering the truth behind his demon-dragon nature.

Until he meets his new assignment: Victoria Green.

Victoria Green has felt eyes watching her every move ever since she can remember. Then, Adrian appears. The eyes vanish but new dangers arise as she falls for the mysterious hunter. Cast into an ancient conflict between dragons and demons, Victoria must trust Adrian’s skill to be enough to protect her from both the outside world and that which grows within her.

Chance brought them together but will love and passion be enough to keep them joined? Or will the other forces at play in the dragon-demon worlds destroy them forever?


Glimpsing at the tent in his jeans, she gasped.


In an instant, he was upon her, his mouth devouring hers and making her legs weak.


“You make me lose control, sweetheart, and I’ll be damned if that hasn’t happened in years.”


His hands slid down her waist over her hip and onto her thigh. Her breath hitched as she searched Adrian’s dark eyes.


“Already, you ask?” He sneered, his calloused fingers rising higher and caressing the junction between her legs. His fingertips skimmed over her labia, finding her wet entrance. His grin became smug. Adrian’s nostrils flared and his eyes flashed red as he dipped two fingers inside her, wringing out a breath she’d not been aware of holding.


“You’re already wet for me, sweetheart.”


Bringing his lips down to her, he stole another short kiss that had her whimpering against him.
“Adrian.”


She hugged him, bringing him closer and searching for his warm touch again. His eyes scanned her face, his gaze softening.


“You don’t want this, sweetheart.”


“Yes, yes I do,” she replied pushing herself against his hand. His thumb brushed over her clit. Victoria tensed. Her orgasm hung from a cliff, ready to fall.


Tangling her fingers in his hair, she pulled him to her mouth, teasing the seams with her tongue. He groaned and she tasted him with longing.  Sucking on his tongue, she made love to it as he pleasured her with his fingers. Her body became a mass of over-sensitized sparks as he coordinated his thumb with his seesawing digits. His hand on her waist, held her in place as she humped against him.


His husky baritone triggered her release. Victoria cried out, her pussy convulsing in short waves, hot liquid dripping onto Adrian’s fingers. Her towel fell to a heap on the floor as she lost control, the cool breeze doing little to soothe her heated skin. She wanted more. She wanted all of him.


Victoria moved to embrace him but he stepped away from her. Drawing his fingers into his mouth, he briefly closed his eyes emitting a barely audible sound of pleasure. When he opened them again, she gasped. Red sparks danced in his green depths.


Shaking his head, he turned around and strode out of the room. Victoria stood rooted to the spot, watching in shock as he left the apartment, the main door slamming shut. Tears dampened her vision. Picking up the t-shirt he’d given her, she put it on. More tears trailed down her cheeks as the smell of detergent mingled with his scent. Taking a deep breath, she hastily brushed them away.


Wrapping the discarded towel around her wet hair, she strode to the kitchen, her stomach growling. She didn’t think she’d find anything edible in the small kitchen, but luckily Adrian kept a box of cereal and a few cartons of unopened milk.  Digging into the meal, she shivered slightly as an unsettling feeling grew in her chest. The watchful eyes were back.

Defined as weird since she was about eight, Elyzabeth honors the title by making up songs about her chores, doodling stars and flowers on any blank sheet of paper and talking to her dog whenever he feigns interest.

Losing the battle to the voices in her head is her favorite pastime after annoying her younger sister with her singing. Writing stories full of passion and emotion where love conquers all is her happy pill and she'll forgo sleep to make her readers live the dream.