Hello readers, this is my first ever blog fest/blog hop so I’m very excited to be participating in it. Here it goes:

When my husband and I met, I knew he was interested in me. He kept looking at me from the corner of his eyes every single time I would pass him by. When he asked me out on a date, the only reason I agreed was because I wanted a great dinner I wouldn’t have to pay for. I thought he was cute, but I had been burned by bad boys before, and I would have been an idiot to look at another bad boy ever again (what can I say? Bad boys are my weakness). I told him to meet me outside the restaurant as I hated letting a man know where I live on the first date. When I arrived for the date, I saw him standing by the entrance of the restaurant and in his hand he held a single red rose. I had never received a gift on a first date before.

The date was not what I had expected. I had expected the typical bad boy who only cared about himself and would annoy me by the end of it (but it was my favorite restaurant making the free meal worth it). However, he opened all the doors for me, the conversation was enjoyable, and by the end of the night, I was starting to actually like him.

When he asked me out for a second date, I told him to pick me up at my home. When he arrived and I opened the door, I saw that he was empty handed. Not that I had expected another rose or anything. He led me to the car, and when he opened the passenger door for me, I noticed a single red rose laying on the seat.

After that, he had given me a flower on every single date that followed (with the exception of one when he was running late and didn’t have time to stop at the store, but he stopped at the store in the middle of the date and still got me a flower before he took me back home). Seven months into the relationship I told him to stop as I had run out of vases and was running low on drinking glasses as many of them were starting to substitute the vases. I was running out of available surfaces to put flowers on.

Now that we are married, I no longer get flowers on a daily basis, but I still get them about once a month. Even now as I’m writing this, my eyes drift to the vase full of yellow and red sunflowers that are decorating my kitchen countertop. 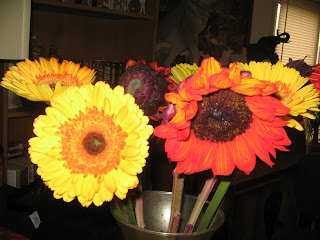 Posted by Angelina Rain at 8:20 AM