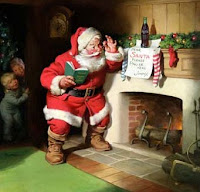 For me, Christmas has always been a magical time of the year. It’s the time that even the most selfish people think of others (at least from my experience). It’s the time of the year when even the most negative people see something good to be happy about. With the exception of long lines in stores, people are happy this time of year. That’s magical. However, the most magical Christmas of my life was when I was about seven or eight.


I had stopped believing in Santa. One day, I stuck into my mother’s closet so I could prance around in her stiletto heels when I came across a brand new doll, still in its box. There were a few other toys in the closet too, but I don’t remember them. Although I liked the doll, I didn’t think much of it. My little cousin’s birthday just so happened to be December 27th so I figured the doll was a gift for her. I few days later, when I opened my Christmas gifts from Santa, imagine how shocked I was to see that doll and those other toys. Right there and then I knew I was being lied to. Those weren’t from Santa. Santa wasn’t real. My mother tried to explain that Santa brought over the gifts early but I didn’t believe that. Why would my mother wrap them then, if Santa forgot? And why would he forget? Besides, everyone else said that Santa magically visited everyone between Christmas Eve night and Christmas morning. Why would he give my mom my gift early but not do that with anyone else? I learned that Santa wasn’t real! All year, I believed that Santa wasn’t real.

The next year, when Christmas rolled around, we had a small Christmas Eve dinner with my parents, my little cousin, and her parents. I kept telling my cousin that Santa wasn’t real. She argued my point.

After eating dinner, all the adults left the living room/dining room area and piled into the kitchen. They closed the frosted glass door that separated the living room/dining room from the rest of the apartment. While my cousin sat by the door watching the silhouettes of flickering Christmas lights from the tree, I went into the kitchen with the adults. I knew what their plan was. One of them was going to quickly disappear and next thing we’ll know, “Santa” would come bearing gifts. Oh no, they weren’t going to trick me this year! I watched them like a hawk. My mother insisted that I join my cousin who was spying on the Christmas tree, trying to get a glimpse of Santa when he’d come. Reluctantly, I joined her, but at all times kept one eye on the adults (who were no more than 10 feet away). As I watched through the frosted glass door, I saw a shadowy reflection of the balcony door opening, and a red ball entered the room. I was in awe as this figure started unpacking his bag by the tree, and then he turned around and left. I quickly ran into the kitchen and counted all the adults. They were all there. It was impossible that any of them would have pulled that off in the limited time that they had. That could only mean one thing; Santa was real!

For many years I believed in Santa all because of that single memory. And when I learned that Santa wasn’t real, for many years I questioned my mother as to the identity of Santa. I would always get a knowing smile out of her with the “I don’t know what you’re talking about” line. It wasn’t until last year (yes, last year) that she finally told me the truth. It was a relative of the upstairs neighbors.

Merry Christmas Everyone!
Posted by Angelina Rain at 9:03 AM