The Idiot and the BlogFest A few weeks ago, when I learned of the “Show and Tell Blogfest” I signed up for it because the idea was so great. But then, I got side tracked and forgot that it’s this weekend. Oops! I feel like such an idiot. Well, I guess it’s better late than never, right. So without further ado, here goes my show and tell. 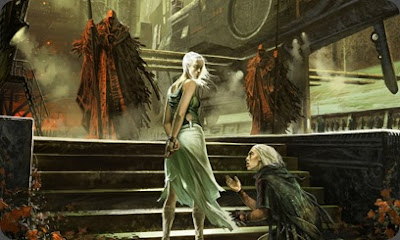 I was a torturer, he was my victim. The elders watched from above, their raggedy robed drenched in dried blood. The stale smell of iron and decay lingered in the air like a fog that refused to lift. They watched, their eyes unyielding and promising pain to me if I didn’t comply.

He begged at my feet, pleading with his glassy green eyes. I slapped him, my hand ached the instant it hit his flesh. He winced, pain sprung up on his face.

I felt tears stain my eyes.

The elders clapped, almost like they approved of my actions. Almost, like they weren’t forcing me to do this. Pride marked their withered, troubled faces.

The prisoner looked up at me. His hand extended for mine, ready to forgive me.

I felt my heart seize. I was surprised I even had a heart.

One of the elders threw something at me, and it fell at my feet. My chest tightened as I looked down at the leather whip. Please, don’t . . . Don’t make me use this.

“Use it,” one of them said, his voice cutting through me like a knife. A shiver raced down my back. I nodded, wishing it would all be just a dream I’d soon wake from.

“Use it,” he repeated, as if sensing my resistance. I looked into his cold, dead eyes, those unforgiving windows to a damaged soul. His eyes promised me a fate worse than the prisoner’s.

Bile rose in my throat, its bitter flavor like hot acid on wounded flesh. I gritted my teeth and bend over to pick up the object of pain. My eyes drifted to the prisoner, his eyes still forgiving me, as if he knew I couldn’t be as evil as I came off.

He licked his lips, a nervous gesture I recognized. His mouth moved yet no sound escaped. I threw the whip over my shoulder as I watched him. His lips moved again, a secret message only meant for me.

“Stand,” it seemed he was saying. “Stand for your beliefs.”

How could I? I was just as much a prisoner as he. Couldn’t he see that?

“Kill him!” One of the elders shouted.

I took a deep breath feeling faint. My hands shook as I tightened my grip on the whip. I looked at the prisoner, pleading forgiveness with my eyes. His sorrowful eyes forgave me, making me hate myself more.

His lips moved again, a silent plea I couldn’t comprehend. Was he saying to fight them?

He nodded at me, as if reading my thoughts.

I looked at the elders. They were getting restless, their torturous eyes burned with hate.

“No,” I said on a breath, my voice barely above a whisper.

The prisoner beside me nodded, an obvious glow of pride marked his once handsome face.

One of the elders came forward. “Are you sure you want to disobey us?”

Ice cold tremors raced up and down my spine, like the fingers of a ghost. My voice rose, a tremor in it as I said, louder, “Yes.”

The prisoner beside me stood, his long legs firm where mine were trembling.

The elder came closer, his stance like that of an animal ready to attack.

“Follow your heart,” the prisoner whispered in my ear.

I closed my eyes. My heart sank to the pit of my stomach. Bile tickled my throat. The hairs on the back of my neck rose, and goose bumps broke out over my body. My grip tightened on the whip, and I swung. I felt it hit flesh.

A roar resonated through the torture chamber. Its pained howl ricocheted, ringing in my ears as if sinking inside my soul.

I opened my eyes, to see the one elder dead at my feet. My captor no longer a threat.

The prisoner beside me took my hand into him. “It’s okay,” he whispered. “You’re not the ice queen they wanted you to be.”

The elders thought they could turn me from a prisoner to an elder. I failed them, but I didn’t fail myself. Because of the help of this nameless prisoner, I got to keep my humanity. I got to keep my heart and my soul. I wasn’t the ice queen after all.

I was told to torture this nameless man, and although I didn’t want to, I slapped him.

The elders who held us both captive clapped, in obvious approval of my following their orders. They threw me a whip and insisted I use it.

I didn’t want to.

I didn’t want to, and the prisoner mouthed “Stand for your beliefs.”

I was scared but I picked up the whip and told the elders, “No.”

“Are you sure you want to disobey us?” one of the elders asked.

“Yes,” I answered and with the encouragement from the prisoner, I killed one of the elders.

We were finally free, and rather than rejoicing in our freedom, all I could think about was that I no longer had to be an ice queen, a torturer.

It’s late at night here and I’m practically asleep as I’m writing this. I tend to write very horribly when I’m sleepy, so please forgive me as it’s not one of my best.
Posted by Angelina Rain at 12:12 AM