Got My Eye on You

This whole week I’ve been sick so I stayed in bed. Yesterday, however, I started feeling better and I was going stir crazy so I went out. I’d seen the blizzard we were hit with looking out the window, but I didn’t know how the rest of my neighborhood looked. I drove around, and believe me, we were hit badly. Wednesday, the whole city was closed with the exception of gas stations and Walgreens. Even Wal-Mart had closed down for the day. I’ve never seen so many businesses and stores closed, not even on Christmas. Between the snow and the famous Chicago wind, we had mountains of snow. There were areas where we could see grass, and then areas were the snow drifts were five and six feet high. There was one house where the snow drift was even with the garage roof. Cars and houses were buried in the snow. We haven’t had postal service for two days as many mail boxes are covered in snow. Luckily, my mailbox wasn’t too bad. My dog is in snowy heaven though, so I guess at least someone is enjoying it. How’s the weather around where you all live?


Anyway, so I went out. I needed dog food so I went to Petsmart. The Petsmart I went to has a doggy hotel in it and there is a glass wall where shoppers could watch the hotel dogs play around. I walked over to it and watched the dogs play. One dog, an older beagle, ran up to the glass wall and just stared at me. He looked straight into my eyes. It was eerie. I walked over to one side, just to see what the dog will do, and he followed. The other dogs were playing around, trying to get his attention, but he just stared at me. So I walked in another direction, and he followed.

I could have stayed there all day but I needed to shop so I walked away, got what I needed, and decided to walk past the glass wall again.

He was playing with the other dogs, but as soon as he saw me, he abandoned his friends and came running. He stared at me, right into my eyes, again. His gaze was strange, as if he knew me or something. Nothing could get his attention away from me.

I walked over to the checkout lane but kept my eyes on the glass wall. He still stared at me. Even when leaving the store, I noticed him standing at the wall with his eyes glued to me.

I wonder what he was thinking. Did I remind him of someone he once knew?

Have any of you ever encountered an animal that couldn’t look away?

~*~ If anyone is interested, my grandma is out of the hospital. Woo Hoo!

~*~ Come back next week for my first ever blog tour. I have lots of cool info to share!

I will leave you all with a picture of my mailbox. The mountain of snow around it was already like four feet tall, but then my hubby piled more on trying to dig out my car. 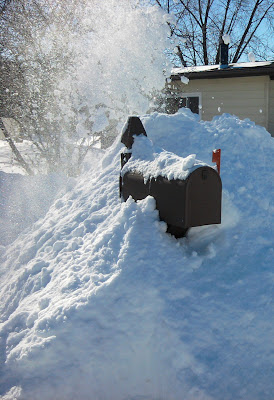 Have a great weekend!
Posted by Angelina Rain at 6:00 AM