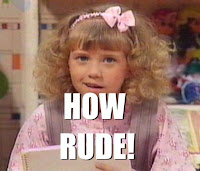 Remember my blog post from a few months ago about my rude house guest? If not, here’s a quick recap:


One of my hubby’s friends came over with his new girlfriend. It was the first time any of us were meeting her. She walked into our house, didn’t even say hi to anyone, walked over to the couch and started texting. And she texted for two hours before leaving. Needless to say, my hubby told his friend to leave the girlfriend behind next time he comes over.

Well, anyway, so a few days ago my hubby’s friend was telling us about how none of his friends like his new girlfriend. Big shock as to why, right? So get this, the friend took his girlfriend to one friend’s house and after they left, the friend called him up and accused the girl of robbery. Yup, robbery. In a house where nothing ever disappears, something vanished.

So the friend confronted his girlfriend, explaining it to her why nobody likes her, and I guess she confessed to stealing from that friend. They are still together from what I hear, but it moved down from a relationship to free and convenient sex.