Hello guys! How was everyone’s week?


This week, I didn’t write a single word. Instead, I did some research and I wrote two outlines. Hopefully both will make brilliant books that will get published. Keeping my fingers crossed. I plan to start writing both stories next week.

Some of the research I did was on genetic engineering. I need to know a little about it for one of the stories I outlined. The research reminded me of a very great book series I read a couple of years ago, James Patterson’s Maximum Ride series. I stopped reading the series after book three as my job and personal life got in the way. Now, I think I’ll get all the other books in the series and read them.

Here’s a little about the series:

Max, Fang, Iggy, Nudge, the Gasman, and Angel. Six kids who are pretty normal in most ways—except that they're 98 percent human, 2 percent bird. They grew up in a lab, living like rats in cages, but now they're free. Aside, of course, from the fact that they're prime prey for Erasers - wicked wolflike creatures with a taste for flying humans.

If you’re a fan of fantasy (with sci-fi elements) young adult action packed novels, then this series is for you.

In other news, I received an award from A Storybook World in the Best of Romance category. Look at the beautiful graphic they gave me. 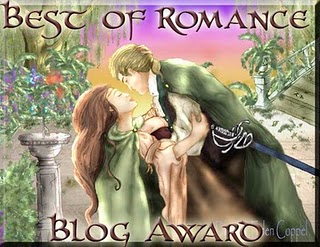 Hope you all have a wonderful weekend!
Posted by Angelina Rain at 7:11 AM