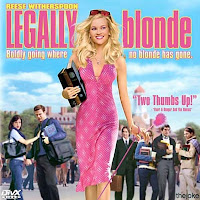 Have you ever seen the movie Legally Blonde? If you have, then I’m sure you remember how at the end of the movie, when Elle Woods finally tales over the case, she stands in front of the judge and gives her the definition of Mens rea, which is a legal term all judges already know. Then after being scalded about that, Elle stars to question the ‘witness’, constantly asking her the same questions over and over. Once again, the judge snapped on her, telling her that it’s already been established that the witness was in the shower.


That is how I feel when I read a book with dumb writing (although I love that movie). It’s one thing when you have to dumb down the plot. It ruins the book, but I’ll probably still read it if I enjoy the characters. And if you dumb down the characters but have a great plot, I’ll still read it. But as soon as you dumb down the writing itself, I’m gone. You see, when an author dumbs down the writing, it sends a message to the reader that the book was aimed at idiots, or that the author thinks all readers are dumb. The book is dumbed down by the details in the writing, and here are a few I’ve seen that made me want to throw the book out the window.

1. Don’t give the reader a vocabulary lesson in the book. I recently read an excerpt of a book online and the very first paragraph went something like this: She looked out the window, which was a wooden frame with a piece of glass in the middle. It was designed to have people look out and see what’s on the other side. Really? Seriously? And I always thought a window was where one sees a reflection of themselves while brushing their teeth. Oops!

2. Don’t remind the reader of the same thing over and over. I understand if you’re writing a mystery and there’s an important clue you want to hint at, yet you don’t want the characters to pick up on it just yet. Sometimes, you have to repeat things then, to remind the reader that the clue is relevant. However, that’s tricky to do at times and that’s one of the few exceptions to the rule. Besides that, don’t remind the reader of useless information. I once came across a book, where the scene was taking place in the kitchen. The author kept reminding the reader of that location by writing something like this: She opened the kitchen refrigerator and pulled out an onion. Walking over to the kitchen trash can, she pealed the onion. Then she headed toward the kitchen sink and turned it on, running the onion under the stream of cold water. She turned the faucet off and opened a kitchen cabinet and pulled out a small blue bowl. Then she headed to the kitchen table and pulled out the kitchen chair and sat down. Now imagine five or more full pages reminding you that the scene is taking place in the kitchen. Yes, I know, you’re screaming for dear help. Talking about screaming. . .

3. Don’t tell the reader about EVERY SINGLE thing the character does and sees. Especially if it’s a scene with some action in it. It slows down the action. Here’s an example: She heard the scream coming from the nursery, which was upstairs. Oh no, her baby! Panic flooded her. She stood from the purple couch on which she had been sitting as she watched the television set that’s about twelve feet in front of her. She turned, to avoid the glass top coffee table. Now the tv was to her right and the couch to her left. Behind her, there was a wall with a small window. To her left beyond the couch, the front windows reached from ceiling to floor. The front door was to the far right hand corner of that wall. She walked toward the wall that was in front of her. It was a white wall with a bathroom door, leading to the bathroom. Next to that door, there was a staircase going up, and beside the staircase, there was the entrance into the kitchen. She took a few steps and now the couch was no longer to her left. She stepped off the white plush rug and now her bare feet were on the hardwood flooring. She ran toward the stairs, and put one trembling hand on the railing. She had to hurry. Had to save her baby. She took the carpeted stairs two at a time, counting twelve by the time she got to the top. I’m sure by the time she got upstairs, and then took in those surroundings and told the reader every single detail, the reader will be asleep and will no longer care what else happened in this book.

4. The last example of dumb writing I’ll leave you with, is showing and telling at the same time. They say it’s okay to tell occasionally through your book, but if you show the scene, and then tell the reader what just happened in that scene, it makes the reader feel like you don’t trust him/her to come up to that conclusion on his/her own. Here’s an example: The man she loved dearly walked into the room and smiled up at her. Her heart skipped a beat. Her heart did that because she loved him and was happy to see him. He walked over to her and threw his arms around her, pulling her to him. It was a hug. She felt the touch of his lips on her forehead. He kissed her forehead. She smiled up at him. That was how she knew she was happy and enjoyed being with him. That’s the lesson in this one. Don’t show and tell at the same time. I’ve stumbled across books that did that and, seriously wanted to throw them out the window except they were ebooks and I love my ereader too much.

So as a reader, what dumb details annoy you the most?
Posted by Angelina Rain at 10:14 AM