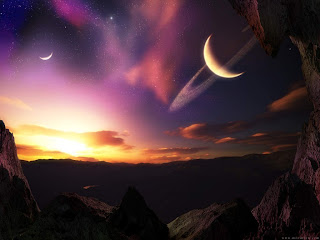 So I’ve been a published author for about four months now and I’ve made a lot of friends in the publishing community. I socialize online with a lot of authors, all of them very cool in their own way.  I’ve also met the occasional diva author. Okay, okay, so I met ONE diva author so far. That’s like what, less than one percent of the author community.  Anyway, so I stumbled upon this diva author’s blog and every once in a while I read what she has to say. So recently (about two months ago), I checked out that author’s blog and she was talking about how she recently read an internet article saying that paranormal romance is about to be the next best thing in publishing. On her blog, she explains that just because the subgenre isn’t hot now, doesn’t mean it will not be hot next year. So, this author abandoned all of her contemporary romances and decided to pick up writing paranormal. She bragged about how she’s going to be ahead of the trend.


Umm – Have you been asleep for the last five years?  Ever hear of Twilight?
Okay, so long story short, that made me think about up and coming trends. In publishing, some genres temporarily take a back seat while others come forth. That’s what happened to paranormal. There have always been books and stories about werewolves and vampires, but now they became more popular than usual. It made me think about what other genres are taking a front seat now.
I’ve noticed sci-fi romance and erotica suddenly gaining a lot of attention. I’ve heard of publishers say they have acquired more of those then any other genre this year, which is the opposite of last year.  I’m glad to see sci-fi romance/erotica getting more attention. I was recently introduced to that genre and really enjoyed it, and I think others will too.
Another genre I’ve noticed is m/m or m/m/m+ erotica. What’s really shocking about this genre is there are a lot of women writing it. I don’t normally read that genre, it’s not my cup of tea, but I have a friend who has a m/m/f erotica coming out where the men are a couple and one of them lets a woman into their circle and the other one is very jealous. That one sounds entertaining, so I think I will give that one a change.
Just like the m/m stories, f/f and f/f/f+ erotica’s are gaining a lot of ground recently too. Although there aren’t many of those in the market yet, I’ve noticed some publishers change their submission guidelines to include f/f erotica and some publishers sent out a submission call seeking those.
Whatever the trendy genres are, I will continue to write what I enjoy writing, no matter if they are trendy or not.
So what do you guys think? Are there any other subgenres that are becoming more popular than usual? What do you think of this list? Would you read, or write any of those just because they are hot now?
Posted by Angelina Rain at 10:09 AM