Hi everyone. My friend Tris has a new m/m book out with Evernight Publishing and he's here to talk about his book as well as coming out of the closet to his family. So right now, I'm turning my blog over to Tris.


When Angelina invited me to write a guest blog I asked for her guidance as to what I should talk about. She told me ‘something personal’, perhaps about when I realised I was gay, or when I came out to my family.
Hmm, coming out to my family was something. You see, I didn’t have to sit my parents down and tell them - because my wife phoned them up and broke the news. Actually, I think she couldn’t wait to burst their bubble. They had never got on well in the ten years of our marriage. The ironic thing is that my parents, I am certain, always hoped I would leave my wife so that they could have me back for themselves, but when the day finally came the circumstances were not at all what they had in mind. To cut a long story short they disowned me, but they became bosom buddies with my ex. Of course, they now had a common enemy.
And was I treated like an enemy. My friends and work colleagues all started to get calls telling them not have anything more to do with me. Fortunately, that all backfired on them. But the worst thing was when they tried to turn my eight year-old son against me, telling him I was a bad person. He may have been eight, but he told them that he knew his dad, and whatever I might have done to upset them he knew I was not a bad person. When they persisted, he told them that if they didn’t stop maligning me he would sever contact with them! I hasten to add, I was meticulous in my efforts to keep him on good terms with them, even when they sought legal advice about taking him away from me.
Not long after, sitting in a pizzeria one evening, my son looked at me and asked, “Dad, are you gay?” I have never lied to him and answered honestly. My heart was in my mouth. Tears came into his eyes and he stormed off into the garden. Much as I wanted to go hug him I decided best to leave him a while. After about five minutes he came back to the table and put his arms around me. “Dad,” he said, “I love you and I will always love you. I just need to get used to it, OK?”
And he got used to it. He is now a fine young man and my best and closest friend in all the world. So, I reckon I’m lucky because I have two great men in my life. It is they who inspire me to write.
~*~

Tristram La Roche is a British author. His first novella, an Amazon and Smashwords bestseller, is On My Knees published by Etopia Press. His latest, Lorenzo il Magnifico is published by Evernight Publishing. His third, Fixed, will be released on 9th September by Etopia Press. Tristram is currently working on a full length novel. He can be found at:
TristramLaRoche.com
Tris on Twitter
Tris on Facebook 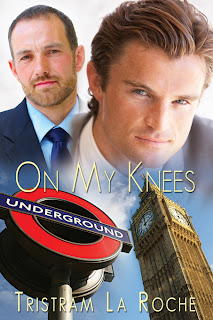 Surviving on alcohol and antidepressants, Mark staggers through his unhappy marriage and watches his London architectural business head for the rocks. When another nasty argument with his wife sends him to the gym to blow off steam, a tall, dark stranger enflames a part of him he’s denied all these years, trying to convince himself he’s not “weird.” But Mark’s not weird, he’s gay. And after a taste of Attila’s lips, nothing can put that genie back in the bottle…

When Luke visits Florence he hopes it will be the start of a new chapter in his life. A chance meeting with a tall, handsome waiter and that chapter starts far sooner than he could ever have imagined.

Lorenzo is everything Luke has been looking for. Hot, sexy and uninhibited, he pushes buttons Luke never knew existed. But Luke lives in England, Lorenzo in Florence, and the time soon comes for them to part... Can this holiday fling become more than just sex? Can it, in fact, turn into a magnificent romance?

Posted by Angelina Rain at 7:37 AM