AR: Tell me a little about this naughty little story of yours.
AA: Readers met Wes and Jayce in MAKE ME SWEAT, and immediately clamored for their story. The two men had only one scene together, but they blew it out of the park. I had to write their story, although it took a while and about three rewrites of the first few chapters to get it just right.

AR: This is m/m, correct? Tell me about your hero, Wes. What are his fetishes? What would he do, or wouldn't do, in the bedroom?
AA: Wes is a quiet type, a computer hacker who's gone legit. Still, he's got a wicked sense of humor and a filthy mind. He'll do just about anything I think, with the man he loved. He gets to experience something sexually for the first time with Jayce and it was fun to write his reaction. Wes is down for anything.
AR: Wes sounds super hot! What about your other hero, Jayce? What are his fetishes? What would he do or wouldn't do in the bedroom?
AA: Well, Jayce is downright filthy in the bedroom. Nothing is off limits. He's an FBI agent, full of secrets and anger and resentment for feeling what he does for Wes. He's a little bit of a cum slut, and a switch.
AR: Damn, he sounds even hotter! Is it hard or easy for you to write m/m? How does it differ from writing m/f?
AA: Surprisingly, no, it's not hard to write. Everything flows just as the straight stuff, the difference is all those he/his in the story. Trying to use other words besides cock are hard, though. I hate penis--a word that has no place in my writing, and dick, well, kinda played out. A lot of cock was used in the making of MAKE ME BURN...Other than that, piece of cake.
AR: Have you done any research on writing m/m?
AA: Well, I loves me some porn. And I really love the variety of books out there in the MM sub genre. There are some extremely talented authors out there who just do it right, IMO. Also, anal sex is fun!
AR: What was your favorite scene in this book?
AA: Gosh, there were so many moments that I just loved. I think it's a toss up between when Jayce first returns to town and breaks into Wes' house and um, kinda stakes his claim (part of that is the excerpt posted) and when Wes turns the tables on Jayce, giving him a BJ with a surprise ending. LOL
AR: What is the sexiest thing a man can do to another man? To a woman?
AA: A good fuck is always the ticket. Man on man, or man on woman. Nothing beats a good railing, one that you can feel days afterwards and still blush over. Flowers and candy, bubble baths, they're all nice, but gimme some hot sex any day. The ultimate, I think, is giving your lover pleasure without any thought to yourself.
AR: Bonus Q: If you walked in on two men doing it, would you watch?
AA: HELL YEAH! I'm a voyeur. I'd pop some corn, pull up a chair, and watch.
AR: Haha! You pop the corn, and I'll bring the margaritas.
MAKE ME BURN
BLURB 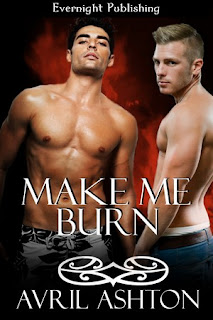