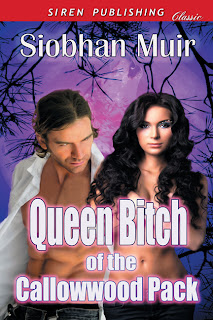 
Have you ever wanted the write the perfect tale? That one story you knew everyone would love? I’ve been striving to write that tale for most of my life. And I thought I had it with my most recent release. Queen Bitch of the Callowwood Pack, my release from Siren Publishing, has had an interesting road to creation and let me tell you its special tale.

It started with a dream. Russell Crowe came to me one night and said I couldn’t tell anyone I was a werewolf, no matter what happened to me, because it would scare the humans. Wasn’t I human? No, apparently not and I had to keep it in the dark. In addition to this, I would be tested at my ability to be my true species, and not give anything away to the human of the community in which I lived.

Oh yeah, this would be easy.

As soon as I woke up, I started writing down the story of the Queen Bitch of Callowwood, Nevada, and a complete adventure began to take shape. There was an entire werewolf pack looking for the next Alpha female and the main character, Julianna Morris, had been chosen as a candidate. Whoever won the “race” would get to be with Jeff Lightfoot (Russell Crowe) as his mate. There’d be political intrigue, black shadow dealings, and great sex.

Until I started giving it to my critique group and an agent who requested it. The agent took seven months to read less than one page and tell me it wasn’t good enough. And the critique group said I had too much backstory in the first chapter (which at the time was a prologue – just a note, get rid of prologues).

Back to the drawing board. I scoured the first chapter, removing 2 thousand words of backstory and useless description. Then I went through the rest of the story and removed another thousand of slow description. I figured I’d gotten to the best refinement of my tale and submitted it to a publisher.

They took 4 months and had to be reminded that they’d asked for it. Their response was “Yes, we still want it.” They gave it over to editors and I was so excited. Now, I’d have the best tale that everyone would love. They were 2/3rds of the way done with it when the publisher folded right out from under it and closed its doors.

Hmm. Now what? Fortunately, these edits made Queen Bitch of the Callowwood Pack even tighter, though they did bring the word count up a thousand words. Still, I was pleased and felt it ready to submit again. There wouldn’t need to be too much done after this, right?

Wrong. Queen Bitch of the Callowwood Pack was accepted at Siren Publishing, but they needed a little more to explain this new and different world of werewolves no one had ever seen before. Back to the editing board I went and made sure any murkiness was cleared up by the end. I added 3 thousand words (2k of which is another sex scene). ;) Queen Bitch is truly the perfect version of this tale and it’s out where everyone can enjoy it. I hope you’ll take a look.

Hiding her new identity, Julianna returns home only to find her teenage crush, Jeff Lightfoot, is the future Alpha of the Callowwood werewolf pack. She’s unexpectedly chosen as a candidate for the pack’s next Luna, the Alpha female—and Jeff’s mate. This is perfect, except Julianna knows nothing about being a werewolf, and someone’s determined to make her fail the Seven Tests of the Luna.

Jeff Lightfoot lusted after Julianna for years, even when he thought she was human. Now she’s home and all his—if she passes the tests. She’s his True Mate and he wants no one else, but pack politics trump Mother Nature and will prevent him from choosing Julianna if she fails.

For the future she wants, Julianna must pass the tests to become Queen Bitch of Callowwood—or watch Jeff take another woman as his mate.

Siobhan Muir lives in Las Vegas, Nevada, with her husband, two daughters, and a vegetarian cat she swears is a shape-shifter, though he's never shifted when she can see him. When not writing, she can be found looking down a microscope at fossil fox teeth, pursuing her other love, paleontology. An avid reader of science fiction/fantasy, her husband gave her a paranormal romance for Christmas one year, and she was hooked for good. Who knew they combined sci-fi with romance? J She’s been writing stories and entertaining friends and family with her writing since she was a kid. She completed her first fan fiction novel at the age of 13. No, it will never see the light of day and everyone should be grateful for that.

Siobhan believes in happily ever after, redemption, and communication, all of which you will find in her paranormal romance stories.

Siobhan’s recent release, Queen Bitch of the Callowwood Pack, is from Siren Publishing, and she published Her Devoted Vampire with Evernight Publishing in February 2012.
Posted by Angelina Rain at 12:53 PM