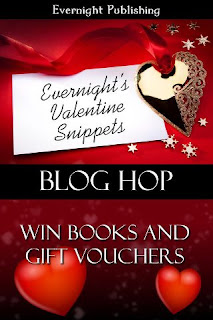 Valentine's is one of the most romantic days of the year, and the perfect day for reading a romance. One of my favorite kind of romances is the reunited lovers storyline. I love plots where a couple was torn apart only to find each other years later. It's so much more fun watching them fall in love again when they still have ghosts from their first time around hanging over their heads.

The following is a snippet from Flames of Desire. In FoD, Ginelle and Seth were high school sweethearts until he left her for collage. Read to see how they reunite after her house catches fire and he comes to her rescue.

She showered quickly, making sure not to use up all the hot water as she was certain he would need to shower too. But, she did stay under the spray for several minutes enjoying as the heat washed away the stress from the night.

Once she was done, she pulled the curtain away and grabbed the large bath towel Seth had supplied. She rubbed it over her long blonde hair, down her face, neck, chest, and back. It wasn't until she ran it over the back of her hand that pain shot through her as though her skin had been peeled off.

"Ouch! Fuck!" She screamed and hissed in pain, remembering that she burned her hand. The shocking events of the night had momentarily blocked the pain and now it throbbed as though making up for lost time.

A ruckus sounded outside the bathroom door and it opened quickly as Seth rushed in, worry etched into his eyes. "Are you okay?"

She stared at him. The pain quickly subsided as she took in the man before her. He had showered too and now only wore a pair of denim shorts. Seth had a perfectly muscled chest and she wanted to run her fingertips along the ridges and crevices of his spectacular body. No, she wanted more than just to touch it. She wanted to kiss it and lick it and taste every inch of this man. Her nipples hardened and her pussy pooled with warm juices.

Her breath caught in her throat as a moan of need and desire escaped her lips before she could contain it. She looked into Seth's eyes and saw the same lust that reflected her own.

He took two large steps toward her and his hands entangled in her wet hair. Seth tilted her head slightly and his lips crashed over hers. The need she felt within her, she also tasted in his mouth.

Now for the giveaway: Do you prefer reunion romances or newly met couples in the novels you read? One lucky commenter will win the ultimate prize! So what is this prize? The winner will be forever immortalized by having a character named after her/him in one of my future books. How cool is that, right?! Now comment away, and don't forget to like Evernight on facebook and check out what other authors are snipping on your blogs.