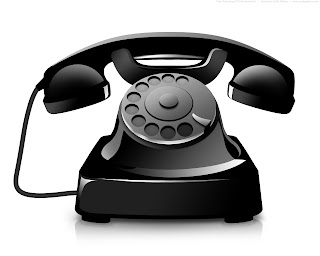 I remember when I was a kid and we had those kind of old fashioned phones. Yes, I actually used the rotary phone for many years until we got the newer press-the-buttons type.

Me... I'm not technically challenged. I don't know a lot when it comes to technology, but show me something one or twice and I'll figure the rest out. My family, however, is a whole other story. My mom catches on after I show her how to do something once or twice, but my dad is just so technologically challenged that I sometimes wonder if he was born in the stone age.

So a few months ago, he stepped on his cell phone and broke the screen. I don't know how he managed to live with his phone without being able to see anything on it. Yesterday, we went to the cell phone place to get him a new phone (and an upgrade for me). He picked out the most old fashioned phone in the whole place, asked the guy behind the counter very dumb questions (like if he still gets voicemail if he says no to the text message option), and finally he purchased the phone.

As we were walking out of the cell phone store, he asked me to call him so he could see how it works. I dialed his number and waited. His phone rang, he flipped open the screen and put it to his ear. But the phone continued ringing. "Hello?" he said into the phone and gave me an annoyed look. It still rang in his ear. "This phone doesn't work."

"You need to answer the phone, Dad," I told him.

It was funny. I hated to laugh at his lack of technological know-how, but it was still funny to see him get frustrated over not knowing how to answer the new cell phone.

Do you know anyone who is tech challenged?

Posted by Angelina Rain at 7:00 AM