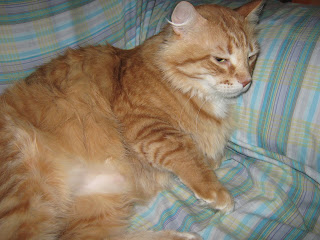 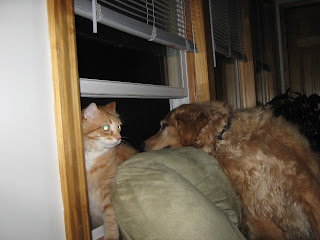 Lately I've been feeling absolutely helpless. I'm watching my lovely 15-year-old cat deteriorate into nothing. He has aways been a heavy kitty, weighting over 20 pounds. It wasn't just fat though. This lovely fur-baby at some point was solid muscle. He used to be an active animal, going outside every day and inspecting all the neighbors' yards.
Old age, however, has dug it's horrible hands into my baby boy and over the last two years he's declined. He wouldn't go outside, his muscles shrunk and anymore he's just skin and bones. Still, he remained strong and healthy. Even in his old age, he continued being his obnoxious self, terrorizing us until he is fed, and then meowing non-stop because he liked to talk (even if we couldn't understand what he actually wanted to tell us).
Over the last tree days, my Brownie hasn't been himself. His life had once revolved around food, and he hasn't eaten since Sunday night. He hasn't had a drink of water since Sunday night as well. It's killing me to watch him and know the end is near. I keep hoping that he would start eating, drinking, being active again, but I also have to face reality. A few family members have mentioned to me that I should put him down. He is suffering, and that would be the right thing to do. Yet, I couldn't bring myself to say goodbye to him yet. I'll have to though. If he doesn't improve by the end of the week, I'll have no choice but to take him in.
I'm feeling so helpless right now.
Posted by Angelina Rain at 11:22 AM