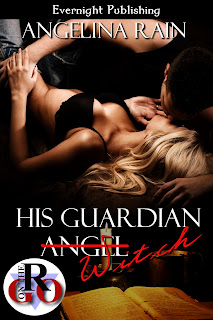 Hello all. I know the Sexy Snippets rules state that the author is only to share 7 sentences, but I really wanted to share this slightly longer snip from my short story "His Guardian Witch". Hope you enjoy!

"I'll take those." Morgan folded the papers in half and shoved them in her purse. “With your bad luck, you’d probably lose them.”

Together, they were about to cross back to the window when a squeak sounded behind the office door.

"Is anyone there?" a man's voice asked.

Her heart beat wildly inside her chest.

The sound of keys entering a lock ricocheted through the room.

She stared at the doorknob as it started to turn. Acting purely on instinct, she turned to Daniel. "Get on the floor."

"I think he heard us." Nonetheless, Daniel got down as she said.

Morgan sat on the principal’s desk, hiked up her skirt to her hips, spread her legs wide, and moaned.

Behind her, the door opened. She tossed her head back and whipped her hair from side to side. "Oh, yeah! Lick my pussy, Principal."

Daniel lifted his head from his ducked position and buried it between her thighs. "It's Principal Morris," he whispered and snaked his arms under her legs.

"Oh, Principal Morris, suck my clit." She rocked her hips back and forth as though driven by passion.

Wood creaked somewhere behind her, and she tossed her head over her shoulder in time to see the door close fully. Morgan breathed a sigh of relief. "That was close."

Daniel fingered the crotch of her thin, lace thong, pulling it aside as he licked her naked folds. "Close indeed."

Everything inside her wanted to press herself into his mouth, to feel his tongue inside her. But… But… "Stop that." She rocked her hips back, ending the physical contact. "Don't want to get caught."

He smiled up at her, that same wicked “drop your panties” look he had given her at the store. "But we've already been caught."
If you enjoyed this sexy snippet, here is where you could find the book.
Evernight Publishing
Amazon
BookStrand
All Romance eBooks
Posted by Angelina Rain at 10:30 PM