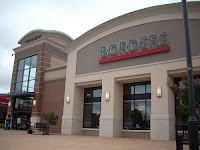 A few days before Valentine’s Day, I went to Borders to look for a gift for my man (a Johnny Cash box sex). There are two Borders near my home. The one I went to was empty. The parking lot was deserted. As I walked into the store itself, an employee rushed to me, offering me help with anything I was looking for. I looked around and realized I was the only customer at the store.


I didn’t find what I was looking for, so I left and went to the other Borders near my home. The other Borders, although it wasn’t as packed as it usually is, had people shopping. I actually had to stand in a short line so I could pay.

A few days after that, Borders declared bankruptcy. When I learned that the first Borders I went to will be closing down, while the other one will stay open, I wasn’t surprised.

Yesterday, I went to the closing Borders. Imagine my shock when I noticed the parking lot was packed. Inside the store it was like a zoo, people shoving each other around to get to a book they both saw at the same time. Half of the shelves were already empty. The checkout line curved around half of the store as people waited patiently to pay for their discounted treasures.

It was ridiculous. The store only offered twenty percent off, which is the same percentage it offers on every other sale.

I didn’t buy much. I grabbed a few poetry books and a Chippendale’s calendar, my hubby grabbed one DVD and a Playboy calendar. Now we both have something to look at.

In other business closing news, my old job is going under. It’s bizarre since when I worked there, we were none stop busy with customers. That actually made me feel good. But the part that stinks is there is no place hiring in this city. When I saw that Borders was hiring, I filled out an application, hoping desperately to get the job. It was at the same Borders that’s closing down. I really doubt I’ll get hired there now.
Posted by Angelina Rain at 8:57 AM