It's Halloween and time for an awesome giveaway. Here is one cool prize you could win: 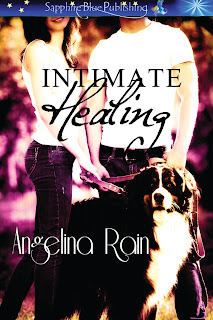 One by one, household dogs disappear only to come back after senseless abuse. Veterinarian Jordan Powell will stop at nothing to make sure her patients safety. Even if that means seeking help from ex-boyfriend, Police Officer Nate Thrillson, the man whose heart she once broke.
The last thing Nate wants is a relationship. He has an inoperable cancerous tumor in his brain and his days are numbered. Yet, he couldn’t resist Jordan.


It’s a race against time to save the dogs and the man who captured her heart. Can the doctor, who made a life out of helping animals, heal a human?

And here is a sneak peek of my favorite scene in the story. *Yes, I have a flair for the dramatic.*

She wasn’t going to cry. She had cried enough over him. Before she could show him how weak she was to his touch and his gaze, Jordan dashed out into the rain. Her tears spilled then, but the rain masked them.

The wind whistled and it sounded like someone yelled “Wait!”


She ran to her car and struggled to open the door. She opened the door a few inches before the wind slammed it shut, shoving her body into the side. Little spasms of pain rippled through her body.


A warm set of muscular arms encircled her, pulling her backwards. Her heart beat wildly at his touch. Her skin tingled with the need to feel him more. Refusing to let him hurt her again, she struggled to free herself from his clutches. She was already too used to his touch. Yet every time he let go, the loneliness hurt her. She couldn’t let him touch her in such a loving way, yet rip her heart out.


“Just tell me! Why did you dump me so abruptly?” She shouted while still struggling against him.


He was silent and his hands loosened from her waist. Jordan swatted his hands away and stood a few steps from him.


She turned to face him. “We were good together. Why did you end it so quickly? Just give me a reason. At least respect me enough to tell me.”


She sighed, frustrated at his stubbornness.


Interested? Want to learn more? Buy it here and 25% of my royalties from the sales of this book will be donated to the Humane Society of the United States.

Or you could just take your chances with winning this book (and other great books) by commenting here and on all these other blogs.