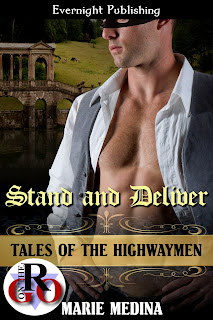 Today, I have Marie Medina over and she's talking about her newest release, Stand and Deliver.

AR: Tell me about this series?

MM: It’s a fantasy series, technically, but the setting is similar to a regency romance. It takes place in Melara, a parallel dimension where life is very similar to our late 18th century, a world where there is still a huge gap between the very rich minority and the very poor majority. Melara, however, has one advantage: its inhabitants know there are other dimensions, though they cannot reach them. One member of the aristocracy, Theodore, decides the women of his world bore him and declares that he’d like to marry someone from another world. Everyone laughs until his godmother, a sorceress, says she can grant this wish with an enchanted portrait…

AR: Who is your heroine and what are some of the conflicts she faces?

MM: Our heroine Eloise is the “lucky” girl who gets pulled (literally) through the portrait and lands in Theodore’s arms. When she finds she cannot go home, she settles for marrying the rich and handsome Theodore, believing he’s her best shot at happiness until she begins to notice a mysterious masked man following her around…

AR: Who is the hero and what conflicts does he face?

MM: Adam saw Eloise vanish, but he knew no one would ever believe him. He accidentally discovers the portrait’s powers and becomes trapped in Melara as well. He meets a man named Gerard, who happens to be a highwayman, and quickly learns all about his new home, joining Gerard in his Robin Hood-like endeavors. When Adam finds Eloise engaged and supposedly happy, he has to decide if he’ll leave her alone forever or try to win her heart. His own heart wins out, and he starts to make plans for sweeping her off her feet…

AR:  Where did you get the idea for this story or series? Who or what was your inspiration?

MM: I was driving to teach a class, just letting my iPod shuffle through songs. Adam Ant’s “Stand and Deliver” came on, and I thought it might be fun to write a story about a highwayman. The next song was The Damned’s “Eloise,” so I began to plot out a romance for my newest couple, Adam and Eloise. I mentioned this idea to my writing partner, Howard, and he got very excited. It began as a submission for Evernight’s Naughty Fairy Tales series, but we soon realized we wanted to tell the other characters’ stories as well, so once book 1 was done, we outlined two more.

AR: As a reader, what kind of books do you like to read?

MM: Horror is actually my favorite genre, but lately I’ve been reading more science fiction. There really isn’t any genre I’m not interested in though.

STAND AND DELIVER
Tales of the Highwaymen Book 1
Eloise thought being whisked to another dimension by a handsome man would be a fantasy come true, but the gorgeous nobleman in question can’t even make her come. As she tries to figure out how to free herself of him, she begins to notice a masked man following her wherever she goes. In this world of lords and ladies, should she be afraid when this dashing highwayman rides up and demands that she be delivered into his arms? Her brain tells her to be wary, but her body tells her that the ultimate fantasy might be within reach after all…
BUY HERE
Posted by Angelina Rain at 7:00 AM