Hello guys, first of all, I really want to thank you all for commenting on Monday’s post. It was a personal topic and I was afraid people will either give me pity or tell me to get over it. You guys gave me neither. Instead, I received great comments that made me feel good inside.


Now as promised, today I’m talking about my wedding day.

My wedding day wasn’t made up of fairy tales. We wanted a big wedding on a tropical island, but the bank account said no. Instead, we got married in a courthouse. On the day of the wedding, my family and I were running late. I had to dye my hair that morning, my mother decided to get her nails done at the last minute, and my dad. . . well. . . he got dressed and waited.

Eventually, we all piled into the car and sped our way to the courthouse. Just a block from our destination, my husband to be called me.

“Where are you?” he demanded, and I could hear the tremor of nerves in his voice. His bride being about fifteen minutes late wasn’t giving him much confidence.

I told him the name of the street I was on and that I’m about to turn into the court house’s parking lot.

There was silence on the other line. Uh, oh, not good. Then, when he finally spoke, he asked me what courthouse I was going to.

I told him and screaming erupted on the other line. “You’re ditching me at my own wedding,” he was screaming.

When I got him to calm down, he told me what courthouse he was waiting at.

So that’s what happens when you let the man make that part of the wedding arrangements for you. You see, before we got married, my husband complained that his first wife and he married in that courthouse, and the marriage was a disaster. So, when I left him in charge to make the wedding appointment, I told him of the other courthouse. I assumed that was where he would go. How was I supposed to know he wanted to get married in the same courthouse twice? It would have helped had he told me!

I hung up the phone and screamed my news, “We’re at the wrong courthouse!” I was on the verge of tears. As weddings went, this was a disaster. How often to you see the bride and groom go to different locations?

My mom, the driver in the family, turned the car around and drove, breaking every traffic rule and speeding rule known to man. We arrived at the other courthouse in record time.

Everything went well after that. We got married, got in the car, and drove to a public park that was perfect for taking pictures. The park had a waterfall and trees. It had bridges. Often times while driving past that park, you always see couples in wedding gowns and tuxes taking pictures. Once we pulled in and got out of the car, we learned that the park was not only a popular hangout for wedding pictures, but also for geese. There was feces all over the ground. We took pictures and they turned out beautiful. But I was wearing brand new shoes that were killing my feet. As the picture session continued, my feet started aching more, and my smile became more and more forced. Eventually, I just couldn’t take it anymore and had to take those shoes off. Before I took them off, my mother warned me. It’s an omen; If I step in the feces my marriage will feel like I stepped into. . . You know. But if I could avoid it, my marriage will start out hard but will work out.

I did not step into it.

So that’s my wedding day. And the omen was true. There were a few times went I felt as though I was stepping into feces, but every time I didn’t and things worked out in the end, just like on my wedding day. 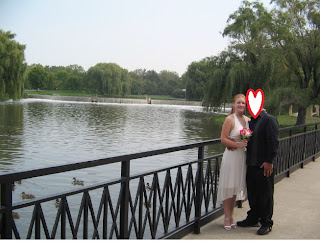 Hy hubby didn't want to see been "by the rest of the world" so I edited out his face. Sorry about that. 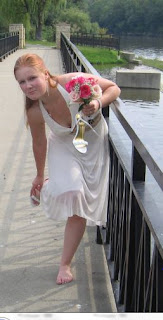 Posted by Angelina Rain at 9:56 AM