I love camping. I love the smell of the outdoors, the fishing and releasing, the hiking through the woods, and eating dinners off a fire. There are two kinds of camping techniques. There’s tent camping, without any form of modern amenities, and then there’s trailer/camper/rv camping where you live in a teeny tiny makeshift house with all modern amenities including a full bathroom and a tv. I enjoy both kinds, although it’s nice to have a house on wheels to stay in instead of a piece of fabric pinned down to the earth. My husband enjoys the camper/trailer/rv experience more.


As a couple, we have gone camping plenty of times but today I will share one trip in particular, it was on our first anniversary as a couple (we weren’t married then), and it was the trip that made my husband realize I’m THE ONE!

That night, we arrived at the camping trailer at around three in the morning. The decision to go camping was literally made at the last minute. The first thing we did upon arriving was turn on the electricity and the water. Only, when we turn on the facet, only air came out. We thought that maybe one of the hoses under our camper must have burst, so my husband grabbed an extra hose and hooked up our trailer to the neighbor’s water supply. Those particular neighbors haven’t gone camping in at least three years, and the camping water is free, so it’s not like we did anything wrong by trying to borrow their water. However, there was still no water. At three in the morning, it’s not like we could ask any other neighbors, or the camp ground management, about the water problem. We put fresh sheets on the bed and went to sleep.

The next morning, upon some investigating, we learned that the water was shut off ‘until further notice’. Yikes!

My man turned to me and asked me then, “Do you want to go home?”

I, on the other hand, had been so excited about the camping trip that I wasn’t about to let one inconvenience stop me. So we decided to stay. We ventured out of the camp grounds into the neighboring town and hit the grocery store where we bought bottled water and baby wipes. We relied on those products to keep us clean, however, after a day or two, we were both desperate for a shower or a bath. I had had enough. I put on a bikini, grabbed a towel and some hygiene products, and made my way to the lake. My boyfriend-at-the-time-husband-now followed. We weren’t the only ones with that brilliant idea, but amongst them, I was the only woman. We found a patch of the lake that was private enough from everyone else. We bathed, and once I felt cleaner, we went back to the trailer. Imagine our surprise when ten minutes later one of the neighbors knocked on our door and told us the water was back on. The instant I found out I took a real shower.

That was the camping trip that made my hubby realized I’m the one. You see, his ex-wife always ran at the first sign of trouble. After she found out her husband had a medical problem (at that point undiagnosed, but later turn out to be epilepsy) she ran into the arms of another man. Now, after years of divorce, his friends are coming out with stories about seeing her in bars with other men after every single fight or disagreement between them, no matter how big or small.

My husband was afraid to make that kind of a mistake again. He didn’t want a woman who would run at the first sign of trouble of discomfort, and when I chose to continue camping instead of going home, he knew I could handle a little trouble and discomfort. That made him love me even more. Soon after that camping trip, he got down on one knee and popped the question.

Now I leave you with a couple of camping pictures. 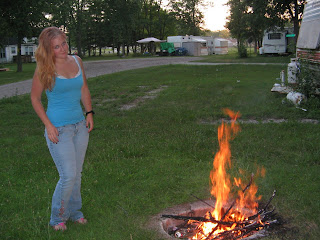 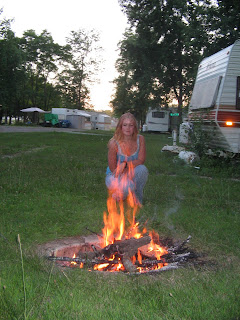 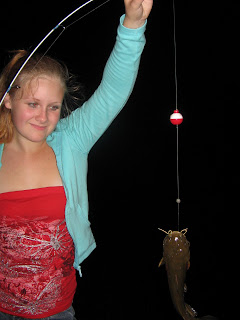 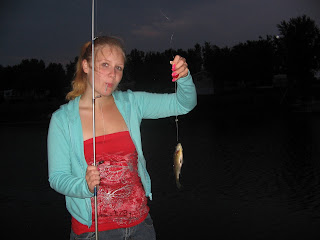 I’m not smoking in this picture (I don’t smoke), it’s a bubble gum flavored lollipop. Overgrown kid? Yes, yes I am.
Posted by Angelina Rain at 9:19 AM