I Was a Virgin Once

This Friday is the release day for VIRGINS BEHAVING BADLY, the anthology which includes my short story, BE MY FIRST. To celebrate, all of us "Virgin" authors are sharing stories of our first time.

Wait! Wipe that smirk off your face. I didn't mean that first time. No, this is the first time writing a sex scene.

I wrote my first sex scene when I *gasp* was still an actual virgin. It was back in high school when I was addicted to General Hospital (a soap opera) and I wanted to try my hands at fan fiction writing.

I recently dug up my first sex scene and let me tell you, I learned a lot from it.

Yes, it was that bad. Don't believe me? Read this little niblet. How many times do you think I could use the word "down" in one paragraph? Lets count!

She positioned herself more comfortably on the bed as Jason removed her shirt and started kissing her on the neck. Working his way down to her bra, he lifted her up and undid it. The bra fell lower and she simply grabbed it and tossed it on the floor. Jason started kissing the area in between her breasts. He worked his way down again. He placed his right hand on her shoulder and worked his way down. When he reached her breast, he placed his hand on it and continued kissing down, towards her navel. His hand lid down again, down to her side and simply down.

Told you it was bad! Do you think I should get extra points for using "down" three times in one sentence? 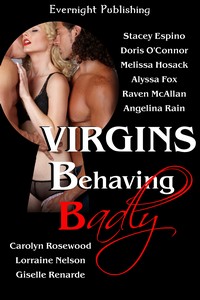 I learned a lot since that vomit fest. I could actually write a sex scene that gets published now. Here's a short excerpt from BE MY FIRST:


His hands gripped her hips. His lips crashed over hers. Fireworks exploded inside her head as he breathed into her mouth. Their tongues danced with each other, a sultry dance of passion and need. When he pulled away, his breath came out in a harsh rush, as though letting go of her had been painfully hard. “Let me be your first.” His lips lingered over hers before he claimed her mouth once more. The towel slipped off her body and pooled at her feet.

“Please,” she whispered against his lips. “Be my first.”

He wrapped one arm around her waist. Swooping her up into his clutches, he carried her out of the bathroom and into his bedroom. He laid her body softly on the black bedspread. The silky fabric appeared cold on her skin, cooling her flushed body, temporarily.

Positioning her for his feasting, he spread her legs. His hands raced up and down her thighs as his head dipped toward her center. The instant his tongue lashed against her clit, her back arched to allow more pleasure.

Licking her core, his tongue dancing seductive circles around her clit.

“Ah.” The moan escaped her lips and rang through the room. Her skin tingled. Heat raced over her body as hot liquid spilled inside her cunt.

She bent forward and reached for him, trying to pull him up. “I want to feel you.”

He lifted his head. “And you will.”


So this was my story of the first sex scene I ever wrote. Now go check out some of other "Virgin" authors.


Want to win a free copy of VIRGINS BEHAVING BADLY? All you have to do is blog, facebook, and/or tweet the release of VIRGINS from now until Friday, leaving the link to Evernight's coming soon page: http://www.evernightpublishing.com/pages/Coming-Soon.html. Post the link to your blog, facebook, or tweet in the comments to be entered to win. Each author will choose one winner on Friday! Good luck!