A Book About Pirates 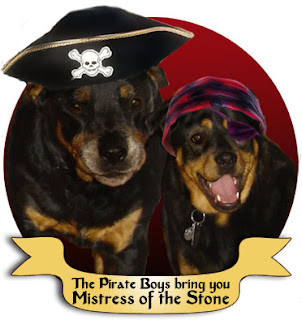 Do you like pirates? No, not the kind who download your book illegally. We all want to hunt those down!
I'm talking about the pirates that own the seas and go cool places. Are you nodding? Yes! Oh wow, it looks like your head is vibrating. Stop before you strain your neck!
Oh, stop choking me! I'll give you info on the pirate, I promise!
*Breathing heavily* Ah, thanks for letting go of my neck! Now, the pirate.
There is this female pirate and she kicks ass. She's strong and brave. And there are werewolves there too. But, why would I give you my info than that when you could just buy the book!
*Insert evil laugh* 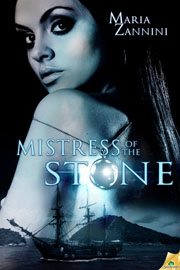 Mistress of the Stone
Paranormal-Historical Romance

A young woman at the helm of a pirate ship braves ghouls, ghosts and werewolves to find her father--or avenge his death.

Luísa Tavares has a list of sins the length of the Antilles, but there’s no time to repent for them now. When a pockmarked Frenchman hands her Papa’s ring—still attached to his severed finger—she orders the Coral back to the Caribbean, despite her father’s earlier warning never to return.

It’s Luísa’s luckless fate that the only man who can help her is a blasted Inglés pirate hunter who’s more dead than alive and locked in a curse he doesn’t want lifted. Worse, his feral sensuality sparks a hunger she can’t ignore.

Xander Daltry hadn’t planned on kidnapping this wild woman—or succumbing to his uncontrollable desire for her. But he needs Luísa and the moonstone she wears around her neck to rescind a witch’s spell. His sister, long dead, and others like her have been cursed to remain in the mortal plane for eternity. Only the stone can set them free.

The only way to convince the reluctant pirate queen to help him is to withhold one small bit of the truth. For if she learns who really betrayed her father, the longing in her fiery eyes could easily turn to murderous wrath…
WARNING: Contains a pirate queen with a sacred gem, a werewolf with an agenda, an island where nothing is as it seems, and a hero with a Jolly Roger that’ll make you purr like a kitten.


BUY IT HERE
To visit Maria (and see more pictures of her pirate dogs) go here
Posted by Angelina Rain at 8:29 AM