Step Away From the Delete Key 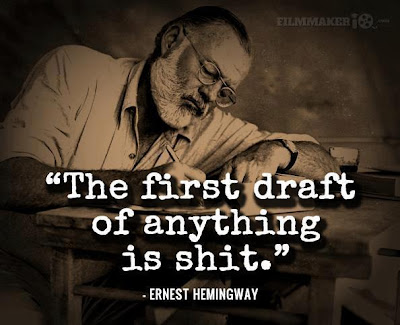 Recently, I had someone ask why I don't have as much published as other e-pubbed authors. Sure, there are those authors who pump out a 50K book a month and I can't seem to write more than 5K a month.
I sat down and thought. Some of those authors have day jobs, too. Some of them, write only on weekends as well. So why do they write and publish, and I just write.
The other day, when I was having difficulties with a WIP and moved my finger to hover over the delete key, it hit me. They write, despite how well their story sounds to them. I write only until the story starts to fall apart. Then I delete.
So what stopped me from deleting this WIP? Well, I saw the image posted above. Someone had shared it  on facebook and it made its rounds until I was staring at it and drinking up the wise words. Those words hit me like a ton of bricks. My first drafts suck..... And so do everyone elses.
There is one other WIP that had been close to meeting the trash bin folder but the character was very vocal in my head and announced that she will not leave me alone until I re-write her entire story anyways. I had kept that story and sent it to beta readers hoping they could find my problem areas. Now, however, I think I'll take that tactic with everything I write. Instead of deleting, I will embrace the crappy WIP, and whip it 'til it shines!
Now the big question: Do your first drafts shine, or are they crap?
Posted by Angelina Rain at 7:52 AM