Hello everyone. Remember the author VC Andrews and her book "Flowers in the Attic"? It was a literary masterpiece, and also a book once banned from many school libraries and a story that breaks many rules.

Recently, I met this very nice author on Facebook who did what Andrews did. She broke rules. Carnal rules. And now, she is here to tell us her story.

Now I'm turning this over to Sonia. 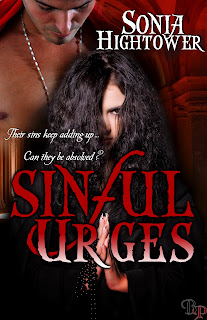 
Follow the confessions of Juan and Maria as they fall prey to lust at first sight. Can they stop themselves before it's too late, or will they become victims of their own sinful urges?
A new neighbor sends Juan running to confession to rid himself of the lustful thoughts he experiences. Each confession becomes more erotic, more sinful than the last. Can Juan stop himself, or will he give in to the desire that threatens his very faith?
The man across the street causes Maria to question her own morals. When she seeks out a priest for confession, she weaves a tale of exotic kisses and stolen moments. How can Maria find sanctuary in her prayers when her body demands she finds solace in her neighbor's arms?
Buy Here!