Hello everyone! My Evernight editor is releasing her own new book. First of all, I don't know how she does it. She edits, she releases new books like every couple of months, and she has a day job, and kids. When does she find the time! Anyway, I'll sure be reading her new book, will you? 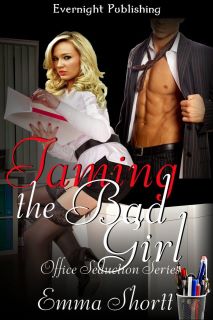 Taming the Bad Girl (Office Seduction Two)
She’d been falling in love with him for years, since the moment they first met, and after one night of mind blowing sex Lucy’s mind was made up. She wanted Giles forever...only he didn’t want her back.

Four months later and Lucy’s life is a mess. A string of men, countless parties and a huge screw up at work, leave her with only one place to turn for help. Back to the man who broke her heart. The man she swore to loathe forever.